Drummer Gene Harding is one of the most skilled and community oriented musicians on the New Orleans music scene. He is also the creator and host behind the Monday Night New Orleans SuperJam. Recognized for having intense versatility on the drums with his signature cowbells & go-go beat, Harding is also known as “Gene the Machine” for having bottomless energy and always delivering a spirited performance. His musical styles range anywhere from traditional jazz to modern-day favorites and R&B with a funky New Orleans twist.

Born in New Orleans, LA, Harding was playing the trumpet at a young age alongside the renowned Russell Batiste. It was not until the age of 28 that he decided to pursue music seriously after being blown away by the drum performances of Wilbert Arnold “Junkyard Dog” (Walter “Wolfman” Washington) and Herman Ernest (Dr. John) at the 1995 New Orleans Jazz & Heritage Festival.

He said to himself, “Wow, this is what I want to be able to do!” Harding then dedicated the following year practicing religiously every day in order to become a professional drummer. He did face a few challenges at first, especially with being left-handed, but with determination he grew, playing the drums with both hands on any given drum setup. Harding also owns and actively plays several instruments other than the drums including percussions, trumpet, tuba, and trombone, not to forget his dear baritone Daisy Jr.

In 1998, Harding had moved to Washington D.C. for some years where he played the drums on a cruise ship that would venture up and down the Potomac River near the White House, until relocating to Dallas, TX after 9-11 happened. In 2005, he returned to New Orleans to help his family during the aftermath of Hurricane Katrina. Since his coming home, Harding’s music career slowly began to take off by having learned a few new skills, like the Go-Go beat from Washington D.C. and how to shuffle in Dallas. Hearing him perform today, especially the Go-Go or a Latin beat, sounds like three drummers playing all in one.

Moving on up, aside from being the front man of his own band, Gene’s Music Machine and also managing his brass band, Harding has had the pleasure of performing with a collective amount of musicians and is featured on quite a few albums with many well-known artists such as Walter ‘Wolfman’ Washington, New Orleans-based trombonist Glen David Andrews, jazz vocalist Sharon Martin, singer-songwriter Chris Klein, along with local group Soul Project as well as the reggae band The Revealers. Currently, he is an active member of the Mem Shannon & The Membership R&B Funk band with whom he has performed with several times at the New Orleans Jazz & Heritage Festival.

In November 2007, Harding formed the New Orleans SuperJam, a weekly open mic jam session designed as a platform for dispersed musicians to regroup and network after Hurricane Katrina. Since its beginning, the SuperJam has served the New Orleans music community by helping musicians, both local and new comers, to connect with some of the best players in town. Every Monday night the event, featuring Harding’s house band, is held at 30 by 90 Jazz Club located at 520 Frenchmen Street and kicks off around 9:30 p.m. and not stopping sometimes until after 3 a.m.

Gene Harding has been an inspiration for the New Orleans music scene as an artist, an entertainer and most of all a leader. He received two honorary plaques in 2009 and 2014 from his peers in appreciation for his constant dedication and loyalty to the New Orleans music community’s growth and development. Harding possesses a true passion for all music and is always ready to help other musicians succeed. 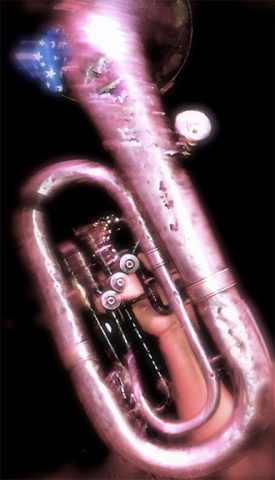 “When I first moved back to New Orleans a few years after Hurricane Katrina, I helped clean houses and rebuild rooftops on some of the affected homes. Like many others, one place I assessed uptown near Carrollton and Claiborne avenues had flooded with over five feet of water. There wasn’t much left in this house, but this baritone euphonium hanging on the wall just above the water line. She was all covered in black paint. I pulled her down and brought her home to clean her up. ‘Daisy’ sat inside my house for about a year until I started playing with this incredible musician named Dave Gregg.

Dave is like five musicians all in one. He can play the bass line with his feet while playing rhythm on one guitar and lead on another and while singing at the same time. Then every now and again he has the nerve to set up a ‘Billy Joel’ style harmonica holder on his chest. People kept asking, ‘So, how many musicians are in the band and how many instruments do you all play?’ I thought to myself, ‘Wow; I’m slacking off, I’m only playing the drums and he’s playing everything else.’

This was my motivation to pick up Daisy. I began blowing the horn while playing the bass line with my feet, the same way I learned the trumpet, tuba and trombone. What I like about Daisy is that I was the best baritone euphonium player on the block because I was the only one who played the baritone on the block. But really, what I like about the horn is her deep sound; it’s just a little lower than a trombone with a rich tone that allows me to play bass lines.

Eventually Daisy started getting old, she began to fade in and out, leaving notes sounding short or flat. I finally retired her when I had the opportunity of getting a brand new Yamaha baritone. The funny part is, even though Daisy had her retirement party she had one last performance a week later when Daisy Jr. broke on the first gig. Daisy retired for good in the summer of 2012.”